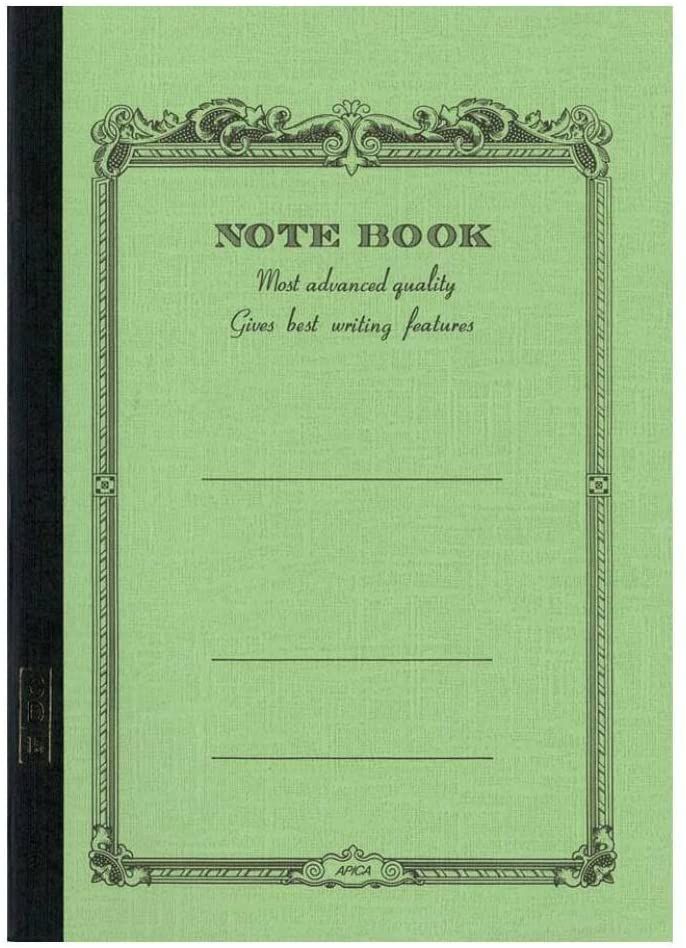 Image from https://www.amazon.com/Apica-Notebook-CD15-Green-x10/dp/B001GS2EZ4 where you can of course purchase these notebooks. No endorsement of Amazon or any particular reseller here. You can also get them at sites like Jetpens, etc.

I love paper. I'll admit it. I love smooth sheets of high quality paper. I love thin sheets, thick sheets, narrow lines, dot journals. I have love for yellow legal pads and cheap scraps of paper. It all has a place.

The second sentence of this is more or less how I view everything I do, both professionally and personally.

What if listening to an inner voice or heeding a passion for ethics or beauty were to lead to more important work in the long term, even if it measured as less successful in the moment? What if deeply reaching a small number of people matters more than reaching everybody with nothing?

When you spend too long in a pursuit that claims to value expertise and enforces a fairly rigid prestige hierarchy, imposter syndrome is inevitable. I have flushed away so much time to this affliction (thank you academia!) that I have moments where I feel desperate for radical solutions.

Almost a year ago I fell from the rafters of my attic, through the ceiling of the first floor, and down to the hard floor. I landed like a gymnast, sticking the landing and bending the legs, trying to absorb the impact, and I collapsed to the ground. I don't know whether the ankle got ripped when I started to fall and had to twist it out of the corner where my foot had jammed in the rafters or whether it was from the impact itself, or a bit of both, but the result was that when I tried to stand, feeling mostly bruised, I collapsed back to the floor. I glanced at the ankle enough to know that it was no longer straight.

The paramedic said, upon entering the room, “Well, that doesn't look right.”

The Value of Unstructured Time

We've been having a non-argumentative argument in my house about what to do with the kids over the summer; more specifically, what camps or activities we might send them to. One of those ordinary parenting logistics things which, with so may camps and summer activities planning to be online rather than face to face (yet still chargin lots of money), has some added wrinkles this summer. In my own household, this everyday planning is but the latest proxy war in the never-ending ideological struggle between my spouse and me on the matter of unstructured time.

I have taken to seizing mornings for my own work. This is a bit of a change, given that for years I had trouble setting aside this time.

I had heard this age old writing advice... and work advice too I suppose: Pay yourself first.

I didn't take this advice when I started as a young academic. Or at least I thought I was taking that advice but I really wasn't. I was sidetracked far too often taking care of stuff for students, responding to emails, or tending to departmental business because of far too much “service” for a young faculty member. In academia, that's not your work. That's the other stuff. Even and especially when your “colleagues” lay it upon you. Family obligations, errands, the demands of young children, ate away further.

It has been the rare pleasure of having mornings carved out for research or writing. By this time it is too little, too late for my previous life.

This past year I have been more serious, more religious about this time in the morning. Nothing scheduled before a certain time, under any circumstances. That's a luxury, so I shrink away from it instinctively. It feels... selfish. That time for me (!?) to work on my stuff... that is too selfish. You mean I should sometimes just work on the things that are a benefit to me, in my career and in my endeavors and my projects? That's so selfish.

But of course it's not selfish. It's necessary.

I needed to have understood the second part of that wisdom.

Pay yourself first. Because no one else will.

It's a rare morning when I don't have a million ideas bubbling up first thing (or at least as soon as the caffeine kicks in). This morning is chilly, and as I sit on my porch and settle in to work for a bit on the various writing, coding, and other projects that might occupy a morning, the cold is a bit too metaphorical. Warming up with the sun has become a pleasant ritual, or at least a reassuring one. It's a kind of sympathetic magic whereby as the sun renders my freeing fingers a bit less freezing, so too words loosen up. Again, more often than not the problem is that I can't type quite quickly enough to keep up and documents span documents, checklists self-propagate and material that has to be worked on later gets noted and set into the queue.

But cold mornings, well, that's a different beast. I'd like to think it's part of the process of rumination. That's a nice meaty word, ruminate — chew the cud, chew over. I like it because it sounds just a bit Anglo-Saxon, like all the earthy words that become meaty in the mouth; but it's Latinate, and a pretty metaphoric Latin at that. At those moments of cold I can sense that there are ideas percolating around, warming up, not ready to boil over yet. Thought ripens with time I suppose, and can't find its way until ready.

I'm stuck in my thinking on a business matter. An idea that is sound and good and appealing, but I can't quite wrap my head around. I suppose there's some fear, as it is a shape of something that is a bigger leap from what I regularly do. So my instincts are to research the crap out of it. But in some ways I've already done a bit of that. There's fear that I'm not really up to the challenge of trying this. There's fear that others — by which I mean the others from my other areas of life — will find it stupid or presumptuous. There's the old academic fear that I won't be qualified or expert enough. (I am constantly reminded that the academic scale of expertise is damaging to all other endeavors. Being expert in a field sometimes means, depending on how strictly you slice the subfield, being among the top x most knowledgeable people in the world. It can often be content based as much as achievement based. Or, rather, there are damaging preconceptions and conditioning around both modes of judging oneself.)

But the sun's out and it's warming up a bit. Hope springs eternal.