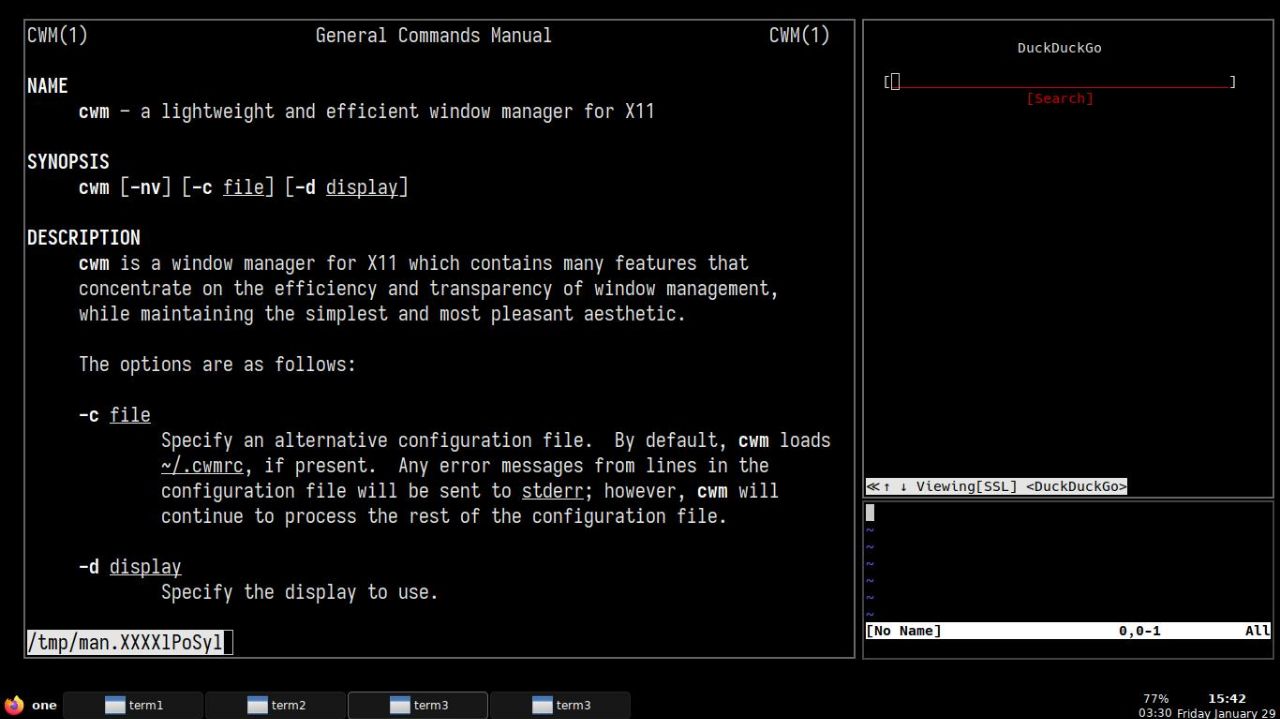 My desktop, virtual and physical, can get crowded quickly during the week. Everything piles up and, far too often, there are a hundred open tabs, file folders piled on the table, and my mind is larded with unease. I've been trying a simple fix.

No, not cleaning or organizing. That's for afternoons and end of the week.

More like out of a sight and out of mind, at least for a bit every morning. Let's call it a daily reset.

For paper, a clean yellow pad every morning, stripped of any legacy sheets. For the digital, an old X220 resurrected for the umpteenth time, running a minimal setup. And for space, rather than heading straight to the desk, a detour to a space that is always free of office detritus (in my case, my back porch).

The key to this is, I think, the laptop.

The Thinkpad X220 is a decade or so old now, so it's not going to run Windows all that well. But then again, why would you inflict such torture on an aging machine like this? No, the setup is lean in resources and in aesthetics:

Everything I do on here in the morning gets saved on my server in way or another, so this is a bit like a Chromebook but using all self-hosted services (e.g. hedgedoc instead of google docs,... actually, I mostly just use hedgedoc). Void itself is both snappy and blissfully free of what is not needed.

What this gives me is a clean starting point every morning without having to lose the halfway points and various “in progress” states on my main computer. A login (old school, no login manager), startx, and then a blank desktop with terminal in one group and a browser in the other for easy switching back and forth. Since it's such a small laptop, with a screen surrounded by a fairly chunky frame, you are in some ways forced to have one task visible at any given time.

Finally, probably the most important part, a bit of manual activation for wifi (which is, by default, off on boot) and — glory of the X220 — a hardware switch to kill the wifi at any point. No push notifications, no automated updates. Heck, I'm making myself type out the wpa_supplicant line every time to get wifi going. The only thing that runs automatically is redshift (like f.lux or other screen-temperature applications) so that the screen will adjust its hue if I work on this machine at night.

And, since I'm getting older (as in, no longer in my 20s), everything has a generous font size which makes it downright impossible to do much more than work on one thing.

I like this setup in part because I can't help but feel nostalgic with the joy that is an old Thinkpad keyboard, but also because it makes clear that the purpose of this machine is simply to write and get going with words in the morning. It's not for email or for graphics or much of anything else. It's for words and text.

I also like this for the same reason I've been a cafe rat for so many years. In addition to caffeine, community, and various other perks, what third spaces like cafes offered, for me at least, was a clear head. The table would be clean and clear before I sat down; I would bus my stuff as I left; and I could expect that it would be clear and clean and reset the next day. I wrote most of my dissertation in mornings at a cafe and a lot of both writing and coding after that has been done in cafe mornings. There's something important in that little nudge toward “flow” or ease that comes from the consistency of a clean slate.

Technology resonates. And so too certain plain-spokenness in technology is something that can resonate in how we work, how we think, and how we interact.

Plainspokenness in technology can take many forms. It might be otherwise called simplicity or minimalism, at least as far as interface and experience goes (recognizing that the labor of achieving a certian kind of pared down user experience can be quite complex). It can be about the code, about the user experience, about data and privacy. It can be about simplicity and reliability. It can shift horizons, as what was large and unwieldy years ago can look minimalist by today's standards. It is sometimes a temporary state, recognizing that there's a place and a time and usefulness for busier and fuller technology.

There will undoubtedly be mornings where I'll sit down at this machine and be troubled and distracted and going in circles. But there's a calm to this setup and a spareness such that what's there on the machine is sort of like a fresh blank writing pad.